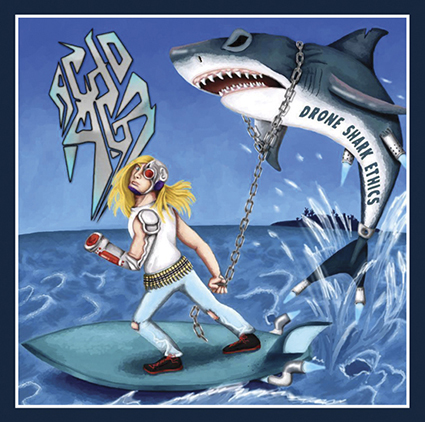 Being heavily rooted in 1980’s style Thrash Metal and mixing in elements of NWOBHM, Hardcore Punk and even 1950’s Rock ‘n Roll, ACID AGE have dubbed themselves as “Hyper Thrash” because of their hyper-active stage antics and furiously fast musical style. Since the bands start they have released 2 EP’s, “Enter the Zomborg” (2013) & “The Troma-Tized” (2014) prior to the full length.

“Drone Shark Ethics” is available now as a Jewel Case CD on the WITCHES BREW Webstore and as a Digital Download on the ACID AGE bandcamp page.

A promotional video for the track ‘50,000 Robot Archers’ can be seen here: http://www.youtube.com/watch?v=uhhKQP2ltd0