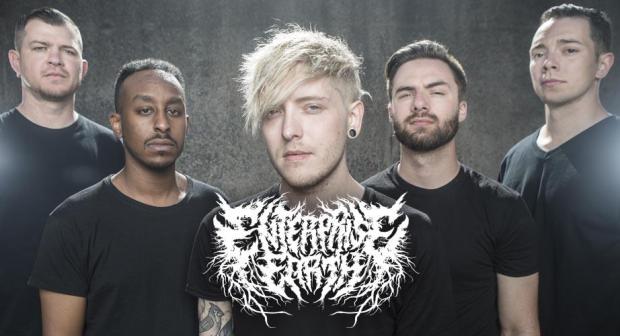 Enterprise Earth shouldn’t be a surprise if you’re into the deathcore genre. Based out of Spokane, Washington, Enterprise Earth have been popularized by many critics to be considered one of the best and ongoing bands within extreme music. Now with a third full-length titled Luciferous, this is the follow-up to 2017’s sophomore effort of Embodiment which was a album that tried so many musical structures, tones, compositions and was a extremely well executed of a release. Vocalist Dan Watson, may know him as the former Infant Annihilator singer has improved over the years since he has joined making him a force being reckoned with.

Musically, they take styles of technical death metal and progressive deathcore with atmospheric portions which allowed the members from Enterprise Earth to showcase the most murderous, brutalized, technical and crafted album’s they’ve done to date. Best description of this album is simply put monumental, pummeling, mood-setting and controlling. Tracks such as Behold, Malevolence, Scars Of The Past and my personal favorite on Luciferous being The Failsafe Fallacy, you’ll get machine gun blast beats, looming layers of hard-hitting instrumentals and headbanging memorabilia that’s incredibly crafted, detailed, and thought-provoking.

There’s even moments during secondary half of this album where it transitions to a much more melancholic arrangement allowing the tracks to build up suspense. Vocally, Dan Watson unleashes his incredible talent ranging anywhere from his lows, highs, screams and masterful squeals to the overall unrestrained anger allowing the listener to pull themselves down into the lurking depths of hell. While Embodiment was Enterprise’s most ambitious, heaviest, and experimental records they’ve ever done, Luciferous does have some minor flaws that will turn away most deathcore fans.

But with that being said, this record is aggressive, undoubtedly heavy as all hell and the members carefully concentrated to perfectly find the harmonics, sound, production and mixing the formula of chaotic blast beats, deathcore breakdowns, death metal inspired musical components, and Enterprise Earth are not only talented what they do for the music, but they’ve studied long and hard to create Luciferous, a album about evolution, growth and maturity. Fans of their past releases will surely enjoy and appreciate greater value of how far they’ve came along the deathcore community. Absolutely recommended for deathcore and extreme music fans all around!